This article first appeared on livekindly.co

Dogs are, arguably, the best household companions. They’re one of the most popular animals around the world—nearly 500 million dogs are kept as pets. Because of this, there is a significant amount of money to be made in the dog food industry. Last year, the pet food market reached a global value of nearly $97 billion. The dog and cat food industries make up 80 percent of the market share.

According to Jan Rasmusen, a dog-lover, consumer advocate for dog-owners, and award-winning author of Scared Poopless: The Straight Scoop on Dog Care, a lot of the dog food on the market is highly processed (i.e. kibble and canned foods).

“Heavily-processed fast foods (burgers, fries, tacos, etc.) as a big diet component can cause major health problems in people. How can fast foods be good for dogs?,” she wrote for Dogs Naturally Magazine. “Only large dog food manufacturers think this nonsense makes sense.” She added: “What we’re doing to our own health with processed foods, we’re also doing to our dogs.”

But there is a shift starting to happen in the dog food space.

Consumers are moving away from processed options and choosing different foods for their pets. Some are opting for organic, high-quality meat brands, others are choosing to avoid meat altogether, and instead, they are feeding their pooches plant-based whole foods only.

Earlier this year, Formula One superstar Lewis Hamilton made headlines when he announced he was switching his British bulldog Roscoe to a purely plant-based diet.

He wrote on Instagram: “since he has gone vegan, his coat is much softer, his paws have healed up, he is no longer limping with the pain of arthritis and his breathing has opened up.”

Hamilton’s observations are backed up by science. Dr. Andrew Knight, a veterinary specialist and a long-term vegan, conducted a study on 12 pet food companies, examining the “nutritional soundness” of meat-based foods and meat-free foods. His conclusion? Dogs can thrive on vegan food if it is nutritionally complete!

Hamilton isn’t alone in stepping away from the meat when it comes to his dog’s diet. According to an online survey, 35 percent of dog-owners are open to the idea of making the switch.

Whether you’re looking to slowly introduce your dog to plant-based foods, or switch their diet altogether, NOBL Foods is poised to help. The U.S.-based brand offers both a vegan dog food and vegan treats alongside their meat-based ones. Although it is worth noting that any drastic diet change should be talked through with a vet first. 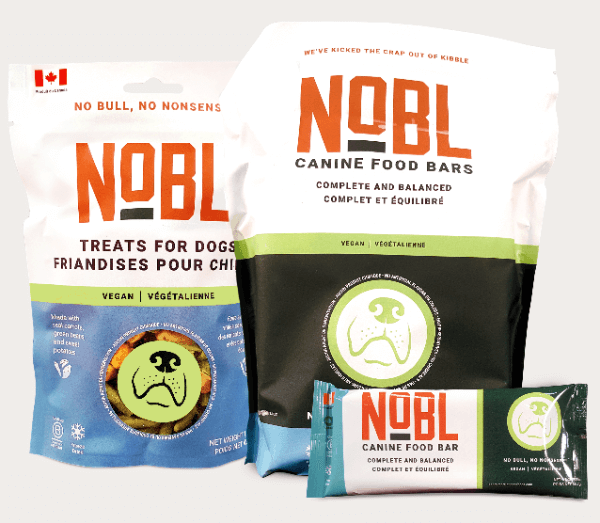 NOBL Foods offers a range of plant-based options for your dog. | NOBL Foods

The primary focus of NOBL and its parent company, Guardian Pet Foods, is that all its foods are 100% complete and balanced, with carefully selected ingredients for optimal canine health. For example, its NOBL vegan Adult Canine Food Bars, which come in a freeze-dried bar, contain whole food ingredients, like pea protein, lentils, chickpeas, and fava beans. They contain more protein than other plant-based options on the market, as well as fewer artificial and synthetic ingredients.

Just one bar, scored for your convenience for incremental feeding, provides a full day’s worth of complete nutrition for a 25-pound dog. Each vegan bar contains 380kcal per bar, made up of 29 percent protein, 36 percent carbohydrates, and 35 percent fat.

The vegan bar, formulated for easy digestion, contains supplemental sources of taurine and carnitine to help support a healthy heart.

“We did a lot of homework to get [our NOBL Vegan Canine Food Bar] right,” Guardian co-founder and chief operating officer Ryan Yamka said in a statement. “We also paid attention to consumer convenience when it comes to dog feeding. Want to go out for the day and feed your dog with no mess? The Canine Food Bars make it easy.” Yamka explained: “You simply give them the bar. No bowl or rehydration required.”

“We combine the benefits of kibble (easy storage and doesn’t take up fridge/freezer space), with the benefits of raw (no heat processing),” he added. The brand also offers freeze-dried, low-fat vegan treats, which are made with sliced carrots, diced sweet potatoes, and green beans.

“Many consumers want to make informed decisions when switching their dogs to a new food,” continued Yamka. “As a result, we publish all our 3rd party digestibility and typical analysis results online for everyone to see. Thus, allowing consumers, retailers, and veterinarians to make a knowledge-based decision. ”

If you want to give NOBL a try yourself (or, better yet, for your pup), or simply find out more, click here. Blog: Are Ancient Grains The Answer?

Why are many pet food companies using ancient grains? Recently, veterinarians and consumers have been misled into thinking grain-free foods cause d...
Read More Blog: The Evolution of a Brand: From Guardian to NOBL

IN THE BEGINNING In early 2017 I came up with the idea for a freeze-dried food bar that would be unlike any other food in the market. I created a ...
Read More Blog: Natural Flavor: It doesn’t mean what you think it means

Many pet foods boast their inclusion of ‘all-natural’ ingredients and lack of by-products. However, are these claims true? Or are they simply marke...
Read More
x